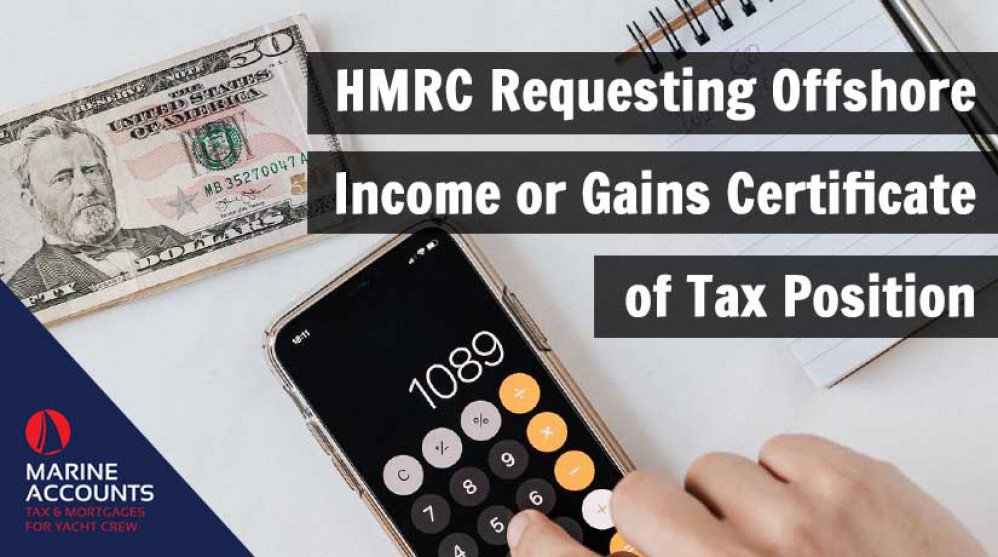 Previously, that information would have remained private prior to the introduction of the Automatic Exchange of Information between your bank and worldwide tax authorities.

It follows that you may be one of the many UK seafarers to recently receive a letter from HMRC advising that any tax advice you had received prior to these changes may now be out of date, and you now have to opportunity to bring your affairs up to date without repercussions.

If you're a seafarer who's accountant has received a letter from HMRC or you recently received one of these letters yourself, you may be concerned as to your responsibilities and what you should do.

In this article, we cover what you need to do and what steps to take.

Read on to find out more or jump to a chapter by using the links listed below:

Why It's Time to Act

Since 2014, this legislation has loomed large over those who have failed to disclose their income voluntarily to the relevant tax authorities.

Whilst it may be only HMRC that are now sending correspondence relating to the Worldwide Disclosure Facility, you can be sure that they are merely the first of many tax authorities to do so.

It is important that you check that you have declared all your UK tax liabilities and the vast majority of people do. Some people with assets overseas have found that changes to their personal circumstances or to tax laws, mean that previous tax advice is out of date.

Under legislation introduced relatively recently, it is no longer possible to keep your hard-earned yachting income in an offshore account with tax authorities none the wiser.

HMRC are now exercising their right to request details of the offshore holdings of any individual whom they believe may be a UK tax resident and as such, have an obligation to declare worldwide income via self-assessment in the UK.

Declaring Income in the UK

Fortunately the UK is one of, if not the most forgiving tax jurisdiction in the world when it comes to income from seafaring, offering a 100% tax exemption under the Seafarers Earnings Deduction (SED).

It is important to remember however, that the Worldwide Disclosure Facility does not relate only to income from employment.

Any UK tax resident individual with income from trusts, rental properties, shareholdings or any other sources will now find themselves much more likely to be held accountable for a failure to inform HMRC of these income sources.

Have You Received a Letter?

If you are one of the many to have received HMRC’s letter, the obvious question is how to move forward.

Whether your tax affairs are up to date already or not, you will be required to complete the certificate enclosed in the letter and forward to HMRC by 19th April 2019.

If you have already been declaring your offshore income under the SED, it may well be that no further action is required by you with regard to declaring income already earned.

It is however, still paramount that you complete the certificate and return it to HMRC or you can be certain that correspondence will not end there.

If you're unsure if all foreign income or gains have been declared, it would be advisable to bring your tax affairs up to date before returning your certificate as soon as possible.

You can do so either through the Worldwide Disclosure Facility as per HMRC’s instruction, or by making a voluntary disclosure through the self-assessment process already used by thousands of UK seafarers every year.

If you are unsure of how to proceed, you can use our tax consultation service and speak to one of our UK tax experts for professional advice or alternatively, let us know what you think in the comments section below and we'll be happy to help.