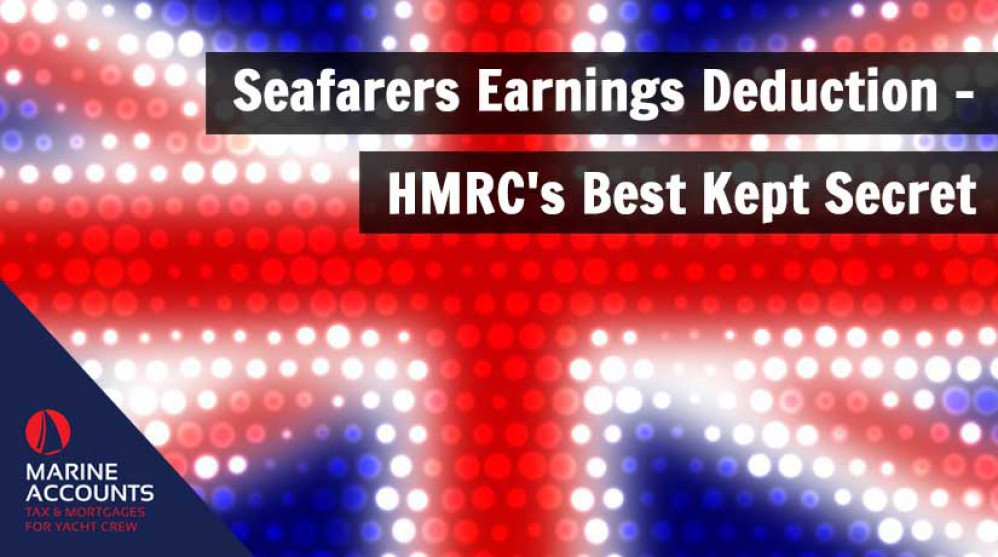 It might be that the Seafarers Earnings Deduction is HMRC’s best kept secret and rightly so.

This unique piece of tax legislation, allows seafarers to claim a 100% tax exemption on all of their foreign earnings, yet amazingly, few people actually use it.

In 2017, this under-utilised piece of legislation celebrated its twentieth birthday.

This article attempts to shine some light how to use this income tax exemption law to your full advantage.

Read on to learn more about the seafarers earning deduction or jump to a chapter by hitting the links listed below:

The introduction of the SED was historical for a number of reasons.

For many, it was felt that since seafarers spend extended periods of time out of the country, working in a highly competitive labour market, and play a vital role in the defence needs of the UK, they should receive a fair tax break.

As a result, the exemption was specifically designed for financial remuneration reflecting the ever-increasing pressures of globalisation and a highly competitive jobs market.

Despite having a hugely attractive 100% tax exemption available to them, many yacht crew still don’t claim it.

One of the overwhelming reasons for this is that in true HMRC fashion, the information required to claim the SED is almost unintelligible.

However, it is still possible to gather enough details from HMRC Helpsheet 205 to confirm whether you qualify.

The main requirement of the SED is that you must work on a ship.

This amendment came into effect in 1998 to avoid abuse by non-seafarers.

For reference, the following fixed and floating vessels are not regarded as ships:

In the industry there is a certain sentiment that this exemption is just fallacy and that it doesn't really work.

However, it has been proven that the SED does exist and it does work.

Therefore, there's two courses of action for anyone who works on a ship overseas:

By choosing to do nothing at all you risk becoming subject to investigation when there is no need for you not to declare.

On the other hand, those that choose to pay corporation tax fail to reap the benefits of a hard fought, 18-year battle between HMRC and the Unions.

The greatest factor causing crews failure to use this tax exemption is a confusion over the number of days that can be spent in the UK.

Those who understand how the SED works understand that you may only spend a maximum of 183 days per tax year in the UK.

Accounting for these days can understandably cause some crew to panic and lost ticket stubs or travel evidence may cause them to avoid being proactive with their tax affairs.

Travel days can add to the confusion, however if you were in a country at midnight, it counts as a day.

What You Need to Do

We always advise our clients to be honest with the number of days spent in the UK but to always round them up.

Maintaining a folder to support your claim will also assist you in the event the HMRC decide to check that it is legitimate.

It is good practice to begin to keep various records to prove where you were located during any given 12 month period, including:

Most of these now exist digitally and can be conveniently stored in the cloud for future reference.

You can also find the information needed to define qualifying periods at sea on the HMRC's Helpsheet 205.

In order to qualify, any periods at sea must include a foreign port, so you can’t embark and disembark from the UK.

In addition, they are judged on the number of days outside of the UK.

HMRC have created a spreadsheet to try to help calculate if the number of days you have spent out of the country are sufficient to qualify.

However, as a result of its overly complex nature, this often prevents people from using it.

To overcome confusion and ensure that you are claiming the correct amount of exemptions, it is best to simply speak to an accountant or use an app.

It is arguable that more seafarers would utilise the exemption that they are entitled to if HMRC were to make it more understandable.

Furthermore, even those who do claim do not always do so correctly by failing to declare all of their income.

It is essential that when you complete a tax return that you declare everything that you earn or receive a return on.

If you choose not to declare certain investments, you run a terrible risk that they will be discovered later and you may receive penalties.

Not something that you want if you are trying to become exempt from paying tax.

The Seafarers’ Earnings Deduction enables you to declare all income derived from investments, except rent, and receive tax back; why not declare it!

In summary, the SED offers a superb alternative to the Worldwide Disclosures Facility as it enables crew to declare all of their offshore income without it being subject to tax.

It is vital to be as honest as possible, especially with the Automatic Open Exchange of Information (AEOI) where something missed on a return could now be construed as tax evasion.

Additionally, if you do not declare your income what else can you do with it?

In the current economic climate, leaving it in a 0% interest account will cause you to lose money as its value fails to rise in line with inflation.

Proof of earnings is required if you ever plan to apply for and raise a mortgage and most lenders now require an SA302 letter, which is only available if you submit an annual tax return.

Previously, HMRC issued printed versions however, since 4 September 2017, they have withdrawn issuing paper versions and you now have to get a printout online.

If you have concerns about your situation and whether you are able to claim the Seafarers Earnings Deduction, we would be happy to review it for you from a tax compliance point of view. Let us know what you think in the comments section below, or get in touch with us.

Liked this article? Try reading: What is the Seafarers Earnings Deduction?